Microsoft has announced General Availability for Microsoft Teams. the collaborating software bundled along with Office 365 will now be offered in 181 markets and in 19 languages. According to Microsoft, more than 50,000 organizations have been using Microsoft Teams including companies like Accenture, Alaska Airlines, Cerner Corporation, ConocoPhilips, Deloitte, Expedia, J.B. Hunt, J.Walter Thompson, Hendrick Motorsports, Trek Bicycle and Three UK. Microsoft has also delivered more than 100 new features in accordance with the customer requests. Office 365 is arguably one of the most popular enterprise offering globally with 85 million active users, the suite of productivity tool aims at increasing the productivity of the individuals and the entire enterprise. Microsoft Teams is designed to cope up with the real-time requirements and suit every workplace be it mid-sized organizations or mammoth conglomerates.

Teams comes with features like audio calling from mobile, video on Android and also the ability to email an entire channel along with the attachments. The best part is that Microsoft has integrated most of the popular Office tools including Word, Excel, PowerPoint, OneNote, SharePoint and Power BI into the Teams in order to ensure that the users get the most optimum experience.

When it comes to Enterprise offering customization plays a quintessential role, it is for this reason that Microsoft lets users customize the workspace with Tabs, Connectors, and Bots. Soon more than 150 integrations will be available including Bots from hipmunk, Growbot, and ModuleQ.

Microsoft is also partnering with SAP and Trello for new integrations and Trello is expected to help the work get done easily with boards, lists and cards.

On the security front the Microsoft Teams will be built on Office 365 hyper-scale, an enterprise-grade cloud which aims at delivering advanced security and compliance capabilities as per their customers need. Microsoft Team also supports global standards including SOC 1, SOC 2, EU Model Clauses, ISO27001 and also HIPAA. 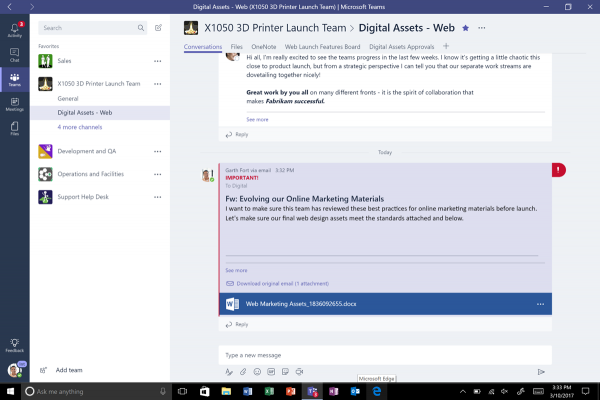